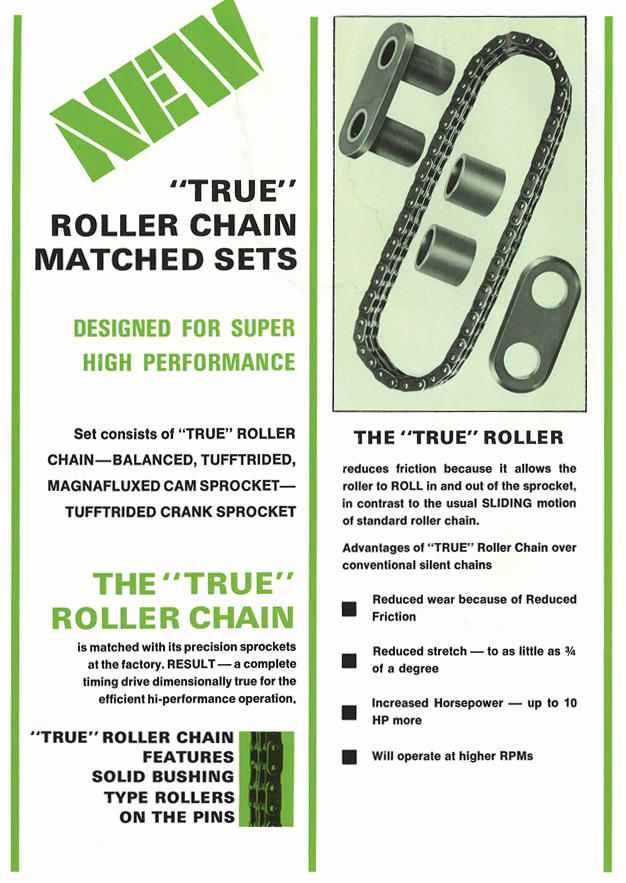 In the late 1960s, the Cloyes engineering team saw the surging popularity of the weekend racer and set out to develop products to service the race crowd. In 1970, the engineering team developed and marketed the very first TRUE® Roller Speed set. With its balanced and multi-keyway sprockets, hand-matched with a new chain featuring solid bushing type rollers, the TRUE® Roller set was designed for racing and changed the timing game forever. In a 1972 letter, Junior Johnson attributes the new Cloyes TRUE® Roller set to aiding in their win at Atlanta (with Bobby Allison driving). The duo won 10 races that year and the Cloyes name soon became known for the best racing timing set in the United States.

As racing grew both professionally and at the enthusiast level, the Cloyes line of High Performance cam drives grew with it. Over the years, Cloyes engineers have collaborated on projects with some of the legendary names in racing – Hendrick, Roush, Yates, Dorton, Mondello as well as the major racing programs at General Motors (GM), Ford Motor Company, Mopar, and Mercury Marine.

As competitors came into the market with copy-cat speed sets, we needed to take it up a notch. In 1992, Cloyes developed and patented the Hex-A-Just® TRUE® Roller. Hex-A-Just® was an industry first, allowing an engine builder to easily adjust valve timing with the turn of an allen wrench, saving hours on the dyno or at the track. We soon added our Quick Button Two-Piece Timing Cover allowing easy access to the timing adjustment. Cloyes developed more than five patents that complimented our Hex-A-Just system, which remains the premier adjustable timing set on the market.

Cloyes also helped power Arie Luyendyk’s winning car at the 1997 Indianapolis 500. This was the first race featuring the Oldsmobile Aurora racing engine. Because of our close ties to GM, we were asked to make the timing set for their entries in the new Indy Racing League.

Until its demise in 2006, all the Pontiac Firebirds running in the IROC Series (International Race of Champions) were equipped with a Cloyes TRUE® Roller set. Other notable accomplishments include Mike Vater’s “Overkill Evolution” as the 2015 Freestyle World Champion and Rick Hernandez with the World’s Fastest Cobra Jet Mustang.

“We have been using Cloyes timing sets with their premium chains and cam sprockets in our big block Ford blown alcohol injected engines for years. Our monster trucks put these components to the test as we run high temperatures in our motors during the 90-second to three-minute freestyle competitions and during racing,” said Vaters. “In the 27 years we have been racing monster trucks, we haven’t come across a roller chain set that lasts as long with little stretch as Cloyes. We also like the adjustability of the cam sprocket which enables us to dial our cam degree in easier than other brands. Based on our experience and compared to other products Cloyes is your best bet for any application be it performance or street vehicles.”

Over the past 50 years, it has been our innovation and attention to detail that has set us apart from the competition. Today, Cloyes custom race products are in winning engines at all racing levels across the country and around the world. We continue to work for you, the professional racer. We know what’s on the line when you head to the track. We are committed to continue providing the unmatched quality and performance you expect to keep you ahead of the competition.

Cloyes, based in Fort Smith, Ark., is the North American leader and global designer, developer, manufacturer and distributor of timing drive systems and components for the automotive aftermarket. Its products are mission critical components for engine performance and function and are used in high-performance and replacement applications. Cloyes serves a broad customer base, including wholesale distributors, national and local retailers, re-packagers, and production engine rebuilders, and sells its products under the Cloyes® brand worldwide as well as the Dynagear® and CY-LENT® brands throughout North America. To learn more, visit www.cloyes.com.